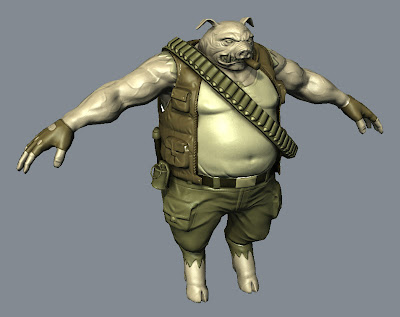 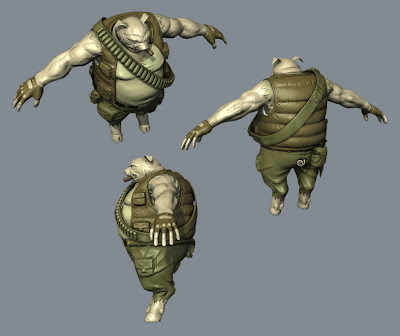 First stage of the texture. Just the base paint so far. The ambient occlusion map has been overlaid to give it a bit of definition, but that's all.
Posted by RobinB at 12:35 No comments: 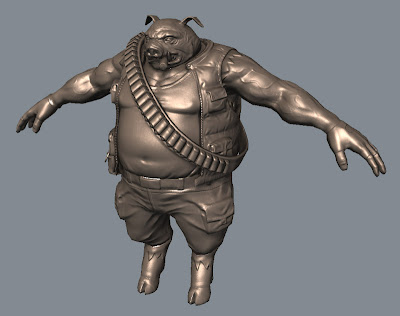 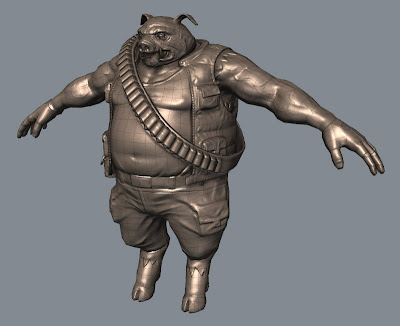 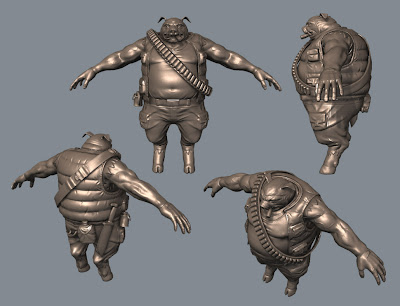 I've added the stitching and seams now. I used Mudbox's ability to paint bump maps for these. I made a series of stitch and seam stamps, set the paint brush to have quite wide spacing, made the stamps follow the stroke and turned on Steady Stroke. It's basically the same process as using the sculpting tools, but no need for a super high resolution model.

It was surprisingly straight forward and successful. I was quite pleased with the results. Then it was just a question of converting the black and white bump map to a normal map and overlaying it on the main normal map.

Next stage, paint.
Posted by RobinB at 12:17 No comments: 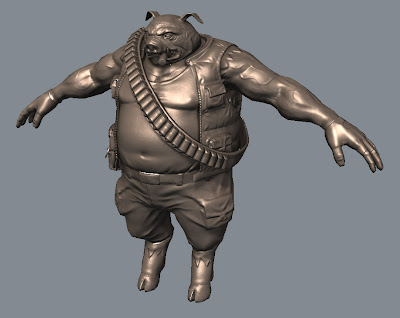 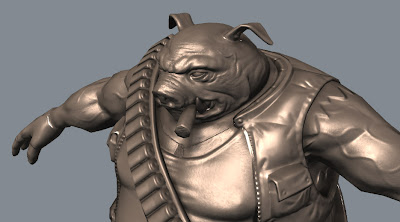 Here's the updated low res model. Now with a properly seperated bullet belt and the UVs moved about so that the left and right arms and legs can have their own texture space which has helped the ambient occlusion on the right thigh.

Next I'm going to try adding seams and stitching to the normal map.
Posted by RobinB at 14:59 No comments: 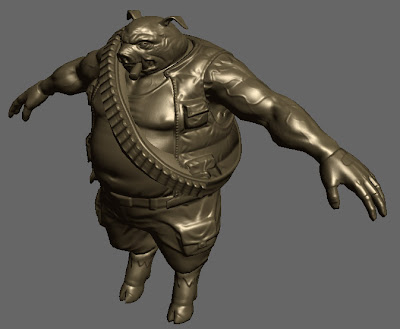 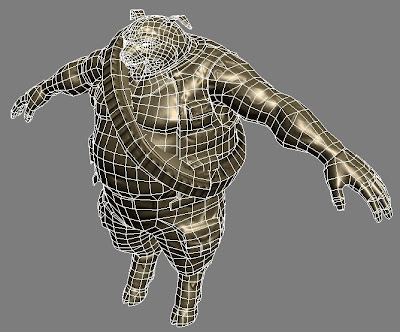 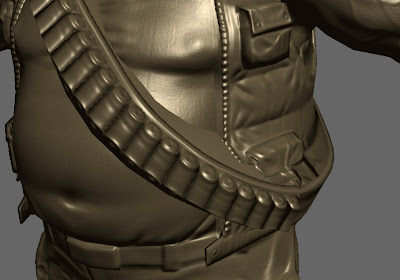 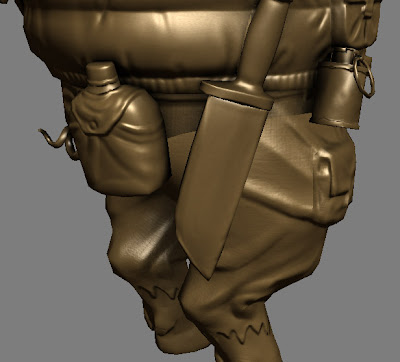 So I'll have to re-arrange the UVs a bit. And since I'm doing that, I might as well seperate the bullet belt too.
Posted by RobinB at 07:14 No comments: 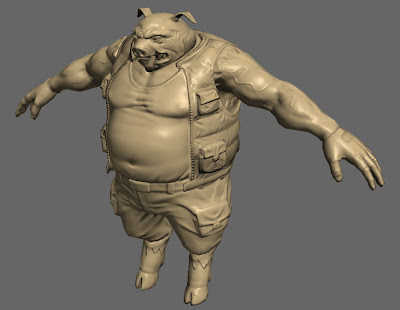 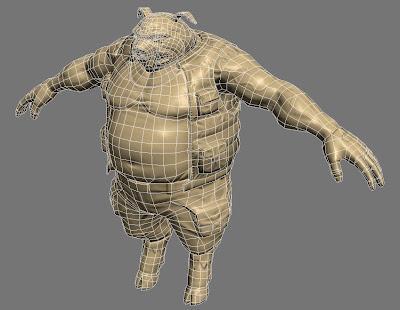 Haven't done the bullet belt and accessories yet though. I'll have to find space for them on the UV map.
Posted by RobinB at 14:28 No comments: 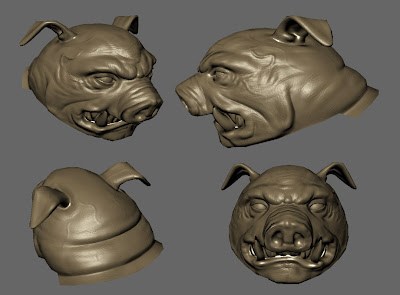 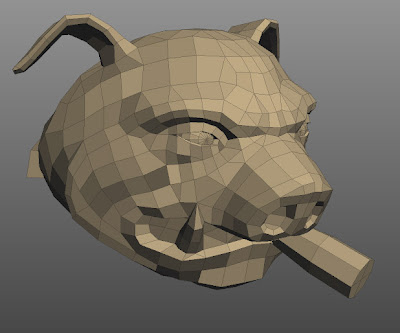 The next stage is making a low res model based on the geometry of the high res one.

I thought it made sense to see how the baked normal map came out on part of the model before doing it all. Especially as Silo was choking on the scene and I had to divide it up anyway. The top image is the above model mapped with the normal map generated from the original sculpt. The tusks need a little work, but the rest is looking pretty good.
Posted by RobinB at 08:56 No comments: 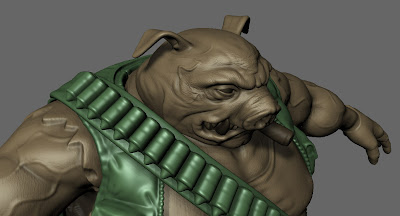 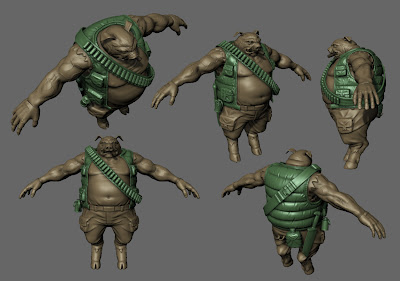 I've now detailed the main body of the character. I've given the fabric an overall texture pass, but I can't get enough detail for things like stitching on this 32bit system. I'll try adding that with a bump map or overlay it on the normal map later.
Posted by RobinB at 08:36 No comments: 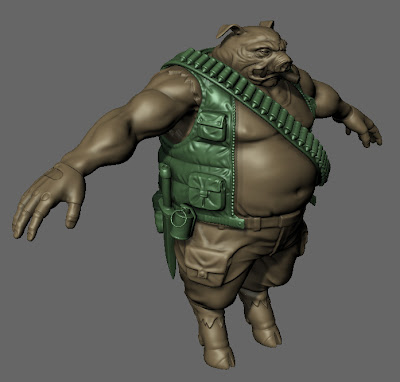 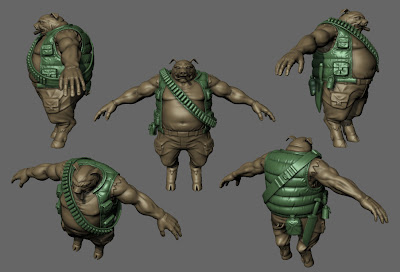 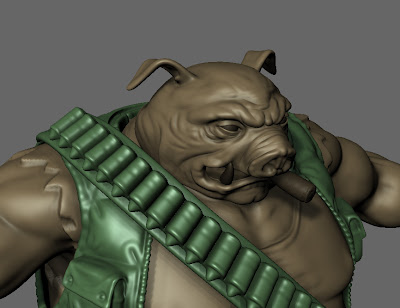 Lots more detail on the jerkin and clothing generally, some refinement of the arms and hands, lots of wrinkles on the face and some asymmetry, updated canteen and some work on the trotters.

Next stage is going to be veins and skin detail I think and maybe some fabric texture too. I might add that as a bump map however.
Posted by RobinB at 13:15 No comments:

Long time, no posts. I've been moving house. Now I'm installed in my new office/studio with lots more space for my sculpting which is great.
Posted by RobinB at 13:12 No comments: